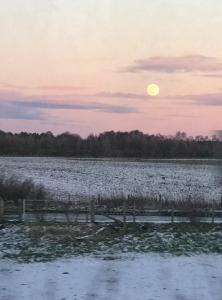 This time surges were similar to my second labour, they started like mild Braxton-Hicks at about 41 weeks and 3 days on the 26th December; though this time they seemed lower and didn’t spread across my whole belly. They were random at first, then more frequent and regular, often coming in bouts of a few hours every 10 minutes. On the third day they started seem like intense period pains and it seemed like baby wasn’t in the same position – I couldn’t feel her back anymore, and it seemed I was getting more kicks to the belly so I guessed she was posterior. I lost my mucous plug in the evening of the 27th December.

On the 28th of December the surges varied between every 10-30mins and I really thought birth might happen that night when I was woken by them at midnight. I stayed up on the birth ball, watched ‘My octopus teacher’ to visualise being under the sea, listened to a really relaxed reading of ‘The boy, the mole, the horse and the fox’ (which was beautiful) and then started to wonder why surges were still only every 10 mins and, if I should really be tracking them? I started reading about prodromal labour and got discouraged. Decided to take the advice and go to bed to rest instead and stop counting.

I saw midwives the next day. They confirmed baby was likely posterior now and advised having a look at Spinning babies .

Surges started again in the evening. This time it was really hard to read to my eldest daughter C at bedtime and feed my three-year-old A to sleep.

Back downstairs we started to time the surges. They were coming every 5 minutes from 8.30pm and lasting for a minute each. I knelt by the couch with a green play mat for my knees, my partner’s hand on my back. The surges came in groups like waves, with a big one every so often. In Australia they are called ‘king waves’, every seventh or thirteenth, depending on where the myth is from; in other places they are called ‘sneaker waves’. One time in the lull that preceded the big surges (mine were not so sneaky) I thought: ‘With this one my waters will break, and they did at 10.36pm. I messaged my midwife Maisie and she texted back:’On my way’.

My partner N filled the pool but I didn’t get in until after Maisie arrived around 11.30pm, because I was worried labour would slow down or stop. When midwife came the surges were 1.5 minutes apart; we stopped timing them and I decided to get in. It was so much relief in the water! I leaned over the side of the pool for each surge. They seemed really intense, I breathed through leaning forward, and for some of the bigger ones I needed to moan through. I felt it change to more downward but it seemed too soon for pushing. I checked myself and wasn’t sure what I could feel. Maybe the end my cervix was open but it was hard to tell the difference. Another community midwife, called Patricia, arrived and they both stayed in the kitchen, except for the occasional baby heart beat check by Maisie. The surges got more and more intense, they still had the pattern of waves. I didn’t know at the time but it was a full moon, the last of December, a blue one, cold one and the oak moon. It makes me think of another wave myth – the full moon brings bigger waves. I felt more and more like pushing and started to wonder why so early? I felt myself again and this time I could feel baby’s head, a finger away!

At this point I felt such a mix of relief, excitement and impatience – I really was in transition and towards the end. I did get that feeling of ‘I’ve had enough’ a little before and wondered if that might be it, but I think the long prodromal labour had really affected me. During the big surges I really wanted the baby out, and every one of them I would start off trying to push-breathe down and then pant and breath out as I thought I didn’t really need to push. This got easier to remember as my daughter got closer to crowning and the tightness made me worry about tears, and also something being wrong, because it was painful. ‘It wasn’t supposed to be painful!’, I thought. They talk about it being numbed by the head in the Marie Mongan’s hypnobirhthing book and the myth of the ring of fire, but I felt it! So probably I was trying to go too fast but also fighting myself. ‘Was it taking too long? Was something wrong? Was I trying too hard and should be relaxing into it?’ so it felt a little like alternating between these two states in every big surge. Sometimes, I still got smaller ones or a break that allowed me to sit back against the side for a minute and think: ‘Wow this is such a nice pool,’ and prepare before dropping back to my knees over the side. I also got really hot at this point and debated whether to get out (but worried it would be even faster) so settled for standing in between some of the surges, bending forward over the side every time one hit.

It was about this time my son A woke up and wanted me but wouldn’t come downstairs. So he cried upstairs for a bit until my partner bought him down as we knew it was so close. A sat on his dad’s legs by the side of the pool and N kept his hand on my back as I held the pool and got a hug in before more surges… I had a faint worry I was going to scare him because surges were much stronger, and as well as panting and moaning I also had to shout and roar. I think I pushed with the NER (newborn/fetal ejection reflex) for her head to pop out and so much poo, too, was around this point. My son talked a lot about this afterwards! I knew baby’s head was there waiting and then, when it popped out, I felt relief and joy as I could feel it bubbly and hairy! As I felt baby wriggling her head I had a momentary worry she would go back in! It felt like she stayed there ages, but it was just two minutes. I shouted to Maisy: ‘How can I help her?’ And she told me it was ok, just go with it. And I remembered a video in which a lady on a birth stool seemed to wait endlessly for the rest to come out. So I did wait, breathing, knowing she’d be out with the next surge and then as the surge came I tried to hold back from pushing but couldn’t help it (again with the NER) and as she came right out at 1.48am and I grabbed her under the arms and pulled up to my chest: ‘Aw baby!’ So much relief! She didn’t seem blue at all, she was calm and scrunched, eyes open, blinking slowly and covered in vernix, and I was so glad she was finally out. I held her with her back to me.

At this point the midwife started to worry I was bleeding a lot so she said I should probably get out and lie down. So they assisted me out while I held our new baby and I walked a trail of blood to our couch. It was a bit of a fuss while we covered it a little (forgot to do that!). And then I agreed to an assisted third stage to help stop the blood loss and get the placenta out – stood for that and we kept it. Bleeding was under control and they checked me for tears. I needed a couple of stitches. I think after birthing my pain threshold crashed because I really hated this part – the placenta, the stitches and cleaning around the area was super painful to me and I just wanted it over. My favourite part after birth was after delivery of placenta but before the stitches – my partners and my eldest daughter and son all there, talking about the new baby and how teeny she is and A counting her eyes, nose, ears, fingers.

Baby stayed skin to skin with me and pooed all over me – first one not to poo inside though, yay! She spent a long time looking for and nuzzling my breast and also her hand. It had been up by her face, as it was in every scan; she definitely hadn’t no issues with sucking and once latched she seemed super keen to feed.

I really feel grateful to the WhatsApp Homebirth and birth support group, so many knowledgeable people on there – birthing mums, doulas, midwives and so many awesome articles, book references and stories shared that made me feel confident and informed when making my birth plan and on the day. It seems like each birth has been better than the one before. It was pretty much ideal in the face of Coronavirus, but also amazing to have continuity of care. My midwife from all my antenatal appointments was at the birth and for the aftercare and the team had been completely on side with my birth plan, respectful, informative and always checking for consent in every decision.

A week later my new baby has a name – Lana – for many reasons but especially for that beautiful oak moon that brought her in on some pretty epic waves.

Tasha lives in East London and her third baby was born at home in December 2020.