I’ve always wanted a homebirth right from the very beginning of this pregnancy. Consultants, midwives, family and friends thought I was crazy. This was particularly after having a complicated pregnancy with twins that ended up with an elective Cesarean at 34 weeks and only one twin surviving.

Being pregnant with one baby this time round, I was determined to make sure that my journey and my birth experience was not only different but positive. In my heart, I believed a homebirth would help me achieve this.

I knew my journey wouldn’t be easy so I armed myself with as much knowledge and support as possible. I did some research, read books, joined Newham homebirth support group, got myself an amazing doula (Ashley from Simply Natural Birth Services) and attended hypnobirthing classes with my husband.

I stuck to my grounds even when it did seem daunting. Newham University Hospital were outlining so many risks, one of them saying that without continuous monitoring they might miss a potential problem and my baby could die! This particularly struck a chord with me. I was so upset and distraught. The hospital even asked me to sign a piece of paper to prove I understood the risks – in a world of litigation I guess they had to cover their backs.

I did explain that if anything escalated at home I wasn’t going to chain myself to the house and was very happy to go into the hospital and that the priority was the safety of the baby.

A month before the birth I was finally referred to the Group Practice Midwives at Newham. I was assigned a lovely midwife and she came to my home every week to do her antenatal checks and give me all the information I needed for my homebirth.

5:00am. I felt my first surge. At this point it felt like a dull period like ache I didn’t think it was anything.

9:00am. This particular morning my two-year-old decided to be extra difficult and demanded to wear her pyjamas to nursery. As I was feeling mild surges and couldn’t be bothered to argue with her I obliged, quickly washed her up and slung her into nursery. One nursery staff mentioned my belly looked like it had dropped and we joked about my baby possibly arriving that afternoon. Little did she know she was right!

9:30am. When I got home I messaged Ashley and told her I was having mild surges and that my mucus plug fell out. She advised me to carry on with my day and not to think about it too much. At this point it didn’t click that I was actually in the early stages of labour.

I remember in my hypnobirthing classes that oxytocin is needed to bring on labour. So in order to produce those feel good hormones I decided to watch Kevin Hart on Netflix and ate cereal in bed.

11:00 am. My lower back started to ache and the surges started coming more regularly. I tried to massage my own back and in desperation I went onto my Amazon app and ordered a TENS machine to be delivered at 6pm that evening.

12:00am. At this point I downloaded a contraction app and was measuring my surges at 50 seconds to 1 minute long with 3-5 minute breaks in between. In between surges I was messaging my husband to come home so he could massage my back.  I was also messaging my mum telling her how I was feeling. Even though my surges were coming regularly I didn’t think I was in labour because they weren’t as painful as I imagined and I wasn’t as panicked like women I saw in movies. I asked my husband to go shopping and get some food supplies. I thought that if this was labour I would be at it for a few days, not least a further 12 hours.

1:30pm. My mum unexpectedly turns up at the door! Originally my mum had always been against a homebirth. Apparently, in the Philippines only rural people that can’t afford hospitals have homebirths. She was also scared that doctors wouldn’t be around if anything went wrong. It was a huge relief seeing her. In moments like this you just want your mum around. Luckily for me she was there.

2pm. My husband arrived home with lots of shopping and found me on the bed with my mum massaging my lower back. He then started to tidy up the house and set up the birth pool in the living room. I asked him to put the hypnobirthing tracks in the background and turn on the diffuser with some lavender essential oils.

I jumped in the shower so I could relieve the back pain that wasn’t going away despite the massages.

Once I had finished my hot shower I went back into bed and my mum massaged lotion on my arms and my back which was so relaxing.

3.30pm. At this time my surges came thick and fast! I demanded my husband call Ashley and the midwives.

The midwives said they would be an hour away as they had to go back to the hospital and get all their gear.

My husband had to remind me how to breath through my surges. Whilst waiting for support to come, my waters broke.

4pm. Ashley arrived. I was on my side on the bed crunched up in a foetal position.

I had Ashley on one side of the bed and my husband on the other both coaching me on my breathing and reminding me to relax my muscles. My hypnobirthing tracks and calming music helped me to also focus. This was actually happening! I was going to meet my little baby soon. I kept thinking one surge is one less till I see my baby and was grateful for its function.

Each time a surge came I would squeeze my husbands hand and pull his jumper that he bought just the other day. I’m sure that my hulk like strength was breaking his knuckles so he inappropriately asked me if I wanted to squeeze a stress ball instead. Predictably I said NO! He asked if I wanted to get in the birth pool he spent ages setting up. I also declined with a firm NO! I couldn’t imagine walking all the way to the living room. No one was moving me from my bed neither for love nor money.

4:40pm. I felt hot and had the urge to push. Ashley said to breath through contractions and not to push but my body was doing it instinctively. I was trying to hold my baby in and wait for the midwives. 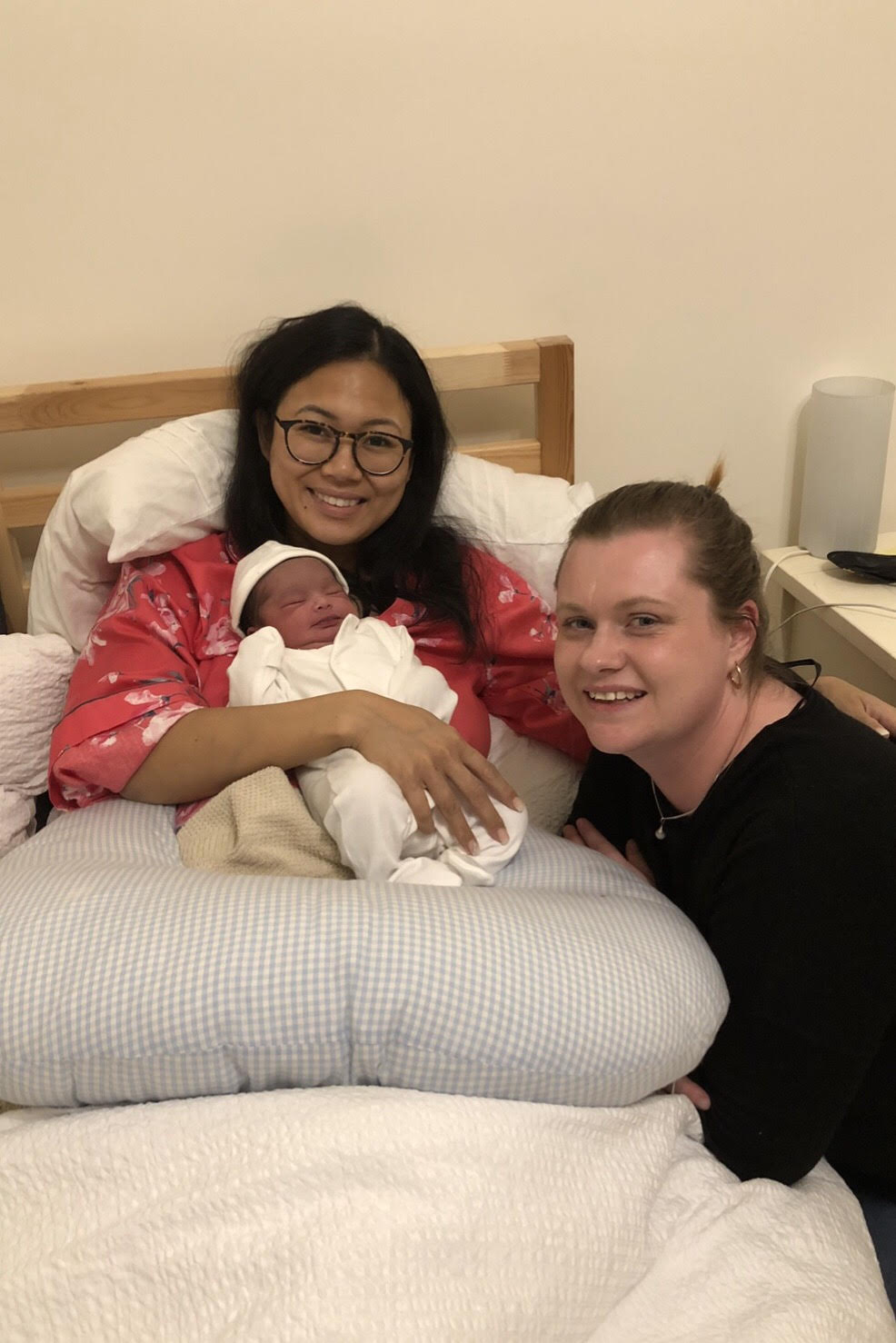 My body started to push this baby. I had to lift my leg slightly. When I did, Ashley saw the head crowing and got onto the phone to the midwives. They said they were on their way, they wouldn’t make it for the delivery and would be a further 15 minutes due to rush hour traffic.

Ashley asked my mum to get some towels and my husband had to hold my leg up to make way for the baby.

In the second push the head came out and by the third push baby was born at 4:57pm. Ashley caught the baby, I heard a beautiful cry and she went straight onto my chest.

5-10 minutes later midwives arrived wheeling in all their kit. They had missed all the action!

They then did all the checks on baby and me. It was great that the midwife who came was the one I had had my final appointments with for the last month. It was so nice to see a familiar face that I knew and trusted.

17:45 – My two-year-old daughter came home from nursery with my sister and brother in law and the TENS machine was delivered at 6.00pm.

The only thing on my mind now was food so we ordered Dominos in and had a feast!

It was beautiful having all the people I loved and wanted there during and after the birth in the comfort of my home. I didn’t have to go anywhere. I felt loved, calm and elated. I was buzzing from it all.

Our beautiful rainbow baby Kiara Rayne weighed in at a healthy 3.94kg.

The thing I learnt from all of this is to trust my body and my instincts, particularly if you want a VBAC. Our female bodies were made for this!

If I could do it all over again I wouldn’t change it for the world.

Rachel lives in Newham and enjoys spending quality time with her family and close friends. She love organising parties, get-togethers and social events. Her youngest daughter Kiara Rayne was born at home in April 2019.