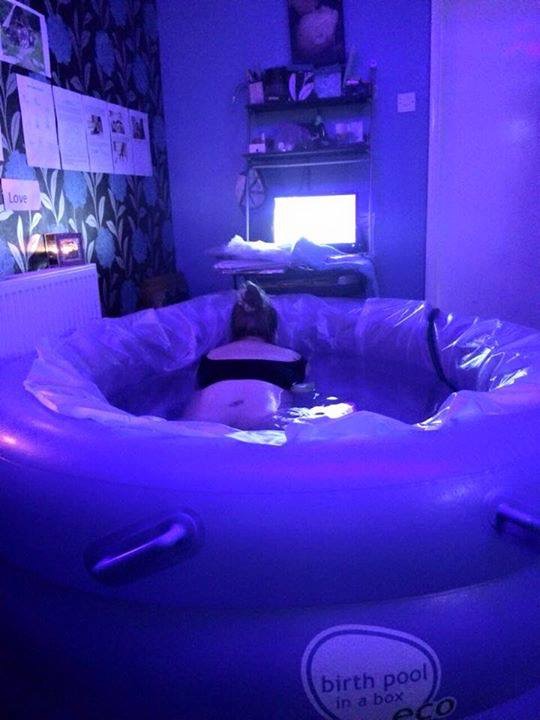 On 6th of January, I woke up feeling slightly cheesed off that I still wasn’t in labour. I sat playing with my phone and felt a few period type cramps… Around 5:30am I started to wonder if there had been a few of those, but felt sure they weren’t strong enough to be anything real. They carried on, so I timed a few, and they were around 8 minutes apart. Our five year old came in the bedroom and said he’d wet his bed, so got in with us. He asked for ‘mummy milk’ and as I laid breastfeeding him, my surges cranked up a notch and started coming every 2 minutes.

At 7:20am I woke my husband Alvin and told him I thought I might have been having some surges. Just as we’d planned, Alvin took over all responsibilities so I could just get on with (hopefully) being in labour, and asked Ashton to go and wake up Bailey, our seven year old daughter so they could start getting ready for school. I then ran a bath, and laid in there while Alvin got the children up, ready, sorted and off to school.

The surges continued to come. My midwife was due to come over at 10am, but called just after 9am to say she couldn’t come because she’d been up most of the night at a birth. I told her I thought I was going in to labour, too, and she promised she’d get some sleep, and I could call any time I needed her.

I got out the bath, ate some breakfast and Alvin and I chilled out in the front room with me on my ball, listening to music. Around 11am I asked Alvin to call our midwife Glenis so she could come and check me. I was desperate to know if I really was in labour. Glenis arrived about 11:45am and checked us, all was great. Around 12:30pm I asked for a vaginal examination and was thrilled to find out I was 5cm. Alvin ran the pool, called our doula Ali and a lovely student midwife Abbie who would be with us.

I carried on chilling out and enjoying knowing I was in labour. Ali arrived and I got in the pool.

I couldn’t believe how wonderful the pool was – I’ve never been in a pool in labour before, and I will now be recommending it to every single person I speak to… The whole time I was in there I felt amazing. I loved it and really just enjoyed it.

Glenis continued doing her routine checks, listening to baby etc. And after a while she mentioned that my temperature was a little raised and my pulse was quite fast. She wasn’t worried, but the next time she checked they were even higher…

Eventually, after they continued to rise, Glenis decided to call the consultant at the hospital to see what they’d recommend. The doctor advised I take paracetamol. I did that, but at the next check my temp and pulse were even higher (we’d even let the temp of the pool drop down hoping that would help but it didn’t).

Glenis was becoming concerned that there might be something going on that we hadn’t previously picked up, which, although unlikely, could also pass to baby. She called the supervisor of midwives to get some recommendations about what we could do, but reassured me that I didn’t have to take any advice at all unless I wanted to. 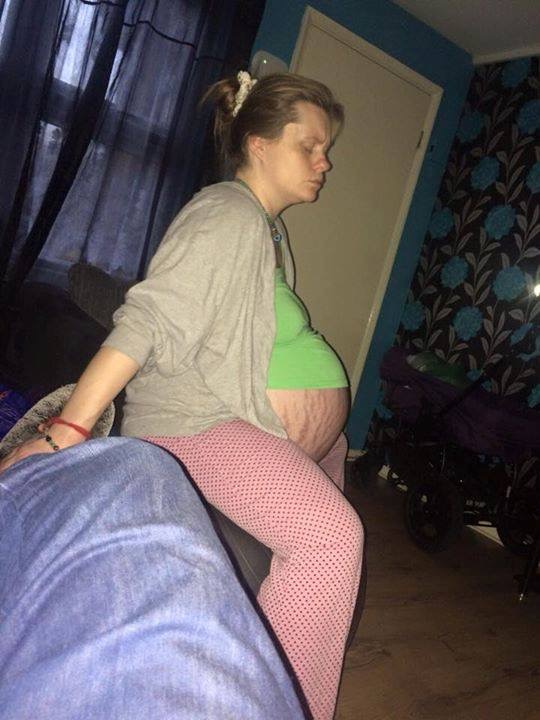 Kathy, the supervisor of midwives, eventually asked to speak to me and we discussed various options and I decided going to the hospital would be best. I didn’t want to do it, I was scared and cried a lot, but felt like it was the only option that made sense because I didn’t want to put our son at any potential risks, and wanted him to be as close to the paediatricians as possible in case he needed them (and at this point it all just seemed strange and we had no idea what my body was doing or why!).

I was so well supported throughout this time. I was never rushed, and never pushed. I knew that all my birth partners would support whatever I chose.

I asked Glenis to recheck me before we went in, at 3:30pm – still 5cm. We had a pretty cool ambulance ride. At this point I was still doing absolutely fine – the paramedic even offered me gas and air and I remember saying: “No thanks, I’m not in any pain”.

As we got out the ambulance I remember thinking ‘these are quite hard to deal with now’ but decided that must have been because I wasn’t in the calm head space I had previously been in. Looking back it was probably just things advancing.

They put us in a room in labour ward. I remember being ok for a few surges, but then things started to get hard. I became restless and every surge took real concentration just to get through. There were talks of monitoring, antibiotics, doctors coming and going but no one telling me what was going on. I told them I wouldn’t be monitored (baby had been completely fine, the only issue was with me and I knew I couldn’t sit still any more for monitoring), but they managed to convince me. If I did a brief 15 minute trace they’d move me to their pool room so I could use the pool, and with some support from Ali and Abbie, I reluctantly agreed as I wanted the pool.

The annoying thing was suddenly now my pulse and temperature had gone back to normal, and as I got more frustrated and it felt like they were taking forever to actually do anything for me, I threatened to go home.

Abbie went to find the monitor but the only wireless one they had wasn’t working. By now I was getting really angry and kept thinking ‘there is nothing wrong and I’m meant to be at home in my pool feeling wonderful like I did earlier!’ Suddenly I got a surge which I screamed at. My whole body shook and I couldn’t work out why it felt so strong, or what had happened. After that I was almost sick and suddenly felt really hot. It was transition but I convinced myself it was just ’cause everyone had upset me so much that I couldn’t cope any longer.

I told Alvin I needed an epidural right away as I simply wasn’t doing this any more. Alvin tried to reassure me and remind me of what I wanted but I just shouted: “Why is no one f***ing listening, I need an epidural!” Glenis reminded me that this was probably a big baby, and it was safer for him if I could feel to push effectively and move about if we needed space for him, and I knew she was right.

By this time there were more doctors and the supervisor of midwives in the room, and I was just wandering around with only a bra on telling everyone I wanted to get in the pool immediately….We’d only actually been at the hospital about 55mins at this point but it felt like ages.

We then moved over to the pool room so I could have the monitoring there while the pool ran and then I would get in it. Once in that room I asked for gas and air, thinking it would help me get through the monitoring. They gave it to me but I never took any.

As the next surge came I thought ‘I would love to do this without any pain relief and decided to squat by the bed for the next surge…’ I heard: “Pop! Splash!” My waters went with an almighty splash all under the bed! I looked down at my tummy and said: “Well done, baby!” And I knew I was finally getting somewhere…

In the next surge my body started to push. As I felt his head coming down I remember thinking ‘f***, this baby is enormous.’ I did about three surges squatting by the bed and Glenis and the supervisor of midwives asked me to kneel or squat on the bed, so they could see him coming and help if needed.

I got on the bed, kneeling. Alvin and Ali stood behind the bed in front of me, as Glenis, the supervisor of midwives and Abbie behind me encouraged me to push, if my body needed to. And it really, really did!

I pushed his head out in that position, and then I could hear the midwives talking about getting his arm out, and I realised he was stuck. They gave me a couple more surges in that position, and I could feel Glenis with her fingers inside me trying desperately to move him around so he would come out; it was incredibly uncomfy but I knew it was necessary – and although shoulder dystocia was my biggest fear, I trusted Glenis completely and knew no one else could handle it like she could. When the midwives asked me to turn over, I knew I had to completely trust them at that point to do the best for us. I turned over, and with their help pushed for everything I was worth – I just knew my little man needed me to.

With a level of pressure that I almost felt would turn me inside out, Tobias suddenly popped out with a huge tug from Glenis. Tobias Edward arrived on 6th January 6:50pm, weighing in at a wonderful 9lb 13,5oz (4460g)!

By now there were two paediatricians in the room, too, and I could hear someone shouting: “Clamp and cut now!” Tobias was laid on the end of the bed not breathing and they quickly clamped and cut his cord and whisked him off to the resuscitare to work on him… Within a few minutes he began to cry and everyone around me was saying: “See, he is fine?! We can hear him!” They brought him back to me for lots of skin to skin and cuddles… I was so relieved to finally have him in my arms!

After about 30 minutes skin to skin, I started to realise I was covered in poo (both of ours) and the bed under me was just a pool of amniotic fluid and blood. Alvin took Tobias (he whipped his top off for skin to skin) and I got up off the bed to birth our placenta. Ali helped me to have a quick shower while Alvin and Tobias got skin to skin and Abbie cleaned up the bed.

Glenis checked me over and I was amazed to find I didn’t need any stitches at all – not even a graze! That is some amazing testament to Glenis’ skills! It definitely wasn’t the calm, loving home water birth we had hoped for – but I’m over the moon that we are all safe, and we still achieved a completely natural birth under those crazy circumstances with my almost 10lb boy!

I was so so lucky to have such a wonderful team of support around me – every single person was vital at one point or another and it has made me feel even more strongly about what I do as a doula – the right support is vital – especially when birth takes unexpected twists and turns!

Ashley lives in E6, London, and is mum to four beautiful children. She is also a doula and Wise Hippo hypnobirthing instructor and have the amazing privilege to be able to support families during their pregnancies, births and beyond. This is the story of her third birth, which didn’t exactly go to plan, but was still an incredible experience for Ashley. She birthed a 4.5kg baby on 6th January 2015, with no pain relief and no stitches; Ashley passionately believes it was the wonderful birth support she had which helped her achieve that.